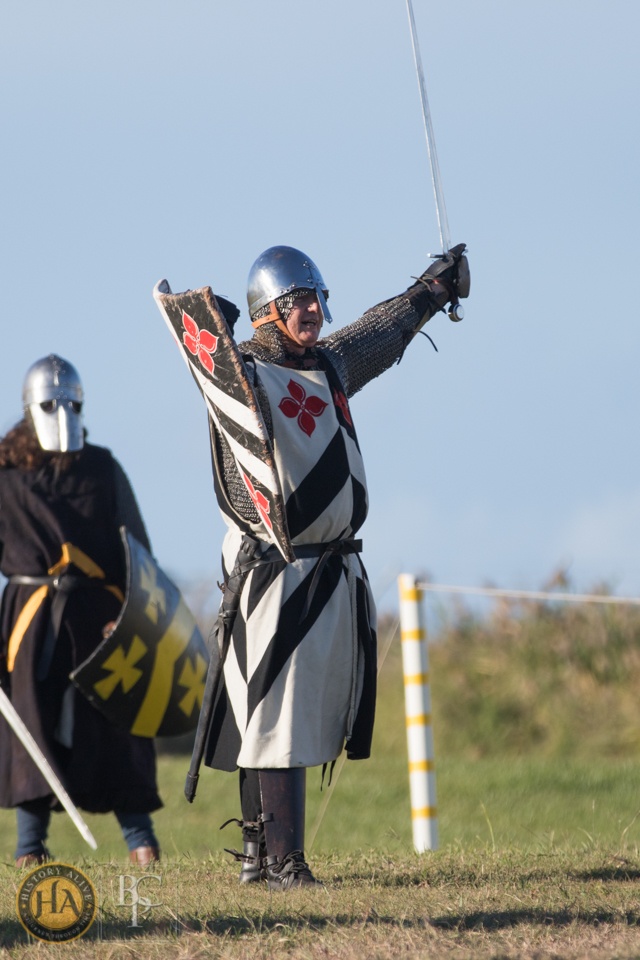 L’Orphelin is a small group portraying crusaders of European origins in the Holy Lands (or Outremer, ‘the land over the sea’). The period re-enacted is the first half of the 13th century, with a specific focus on the Sixth Crusade (1228-1229).

The group’s activities are based around the port city and fortress of Acre on the Mediterranean Coast but draw upon the influences of Sicilian, Cypriot, Byzantine and Arabic cultures. The group portrays a mixture of impressions including French crusaders and ‘poulains’ (the children of Crusaders born and residing in the Holy Lands). Most of our members portray members of the nobility and our encampment reflects this, featuring brightly painted and carved furniture, colourful wall hangings, heavily embroidered bedclothes and rich patterned carpets. Similarly, our costumes are suitable for nobility featuring silk brocades and embroidered trims. We also portray crusader knights and work in tandem with other crusader groups in tournaments and battles.

A pivotal figure of the era is Frederick II, Holy Roman Emperor, King of Sicily and King of Jerusalem. Frederick controversially negotiated a treaty for the return of Jerusalem and the Holy Places into the hands of the Crusaders without a military engagement. At times an excommunicate, Frederick was something of a polymath – speaking multiple languages including Arabic, and having a keen interest in the sciences.

As with Frederick’s court in Palermo, the group is particularly interested in the interplay of cultures, religions and languages in the eastern Mediterranean that was brought about by the Crusades. Our presentations include aspects of culture and daily life including calligraphy (both eastern and Western), dancing, conducting the Hours of Prayer in Latin in conjunction with Gregorian Chant group, Schola Cantorum, chess (comparing modern rules with those of Shatranj – the medieval Persian form from which modern chess developed).