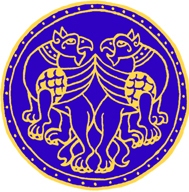 Oltramar is a historical display focusing on the lifestyle, culture, equipment and accoutrements of the European nobility who settled on Cyprus in the late twelfth/early thirteenth century CE. We chose to examine this place and era because during that time Cyprus became a major trading base between the Holy Lands, North Africa and Europe, resulting in a melting pot of European, Byzantine and Islamic culture and goods and thus making it a very interesting and flamboyant place to study.

We are portraying a family on pilgrimage to Jerusalem, in the year 1229, when the Holy Roman Emperor Frederick II signed a treaty with the Ayyubid  Sultan Al-Kamil and restored Christian access to the Holy City and other holy places.

In our display, particular attention is paid to maintaining a high standard of equipment and knowledge through intensive research and reconstruction.  Most of our clothing and equipment has been handmade by our members and all items are as historically accurate as we can make them thereby making the groups’ public displays instructive and stimulating, and also creating a deeper understanding of the period through hands-on experience.

We aim to extend an enjoyable and educational experience to the public through practical reconstructions and displays of equipment and skills from a variety of cultures; to promote research and public interest in the period through means of quality displays, and in doing so flesh out the dry bones of written history by bringing at least a small part of it to life.